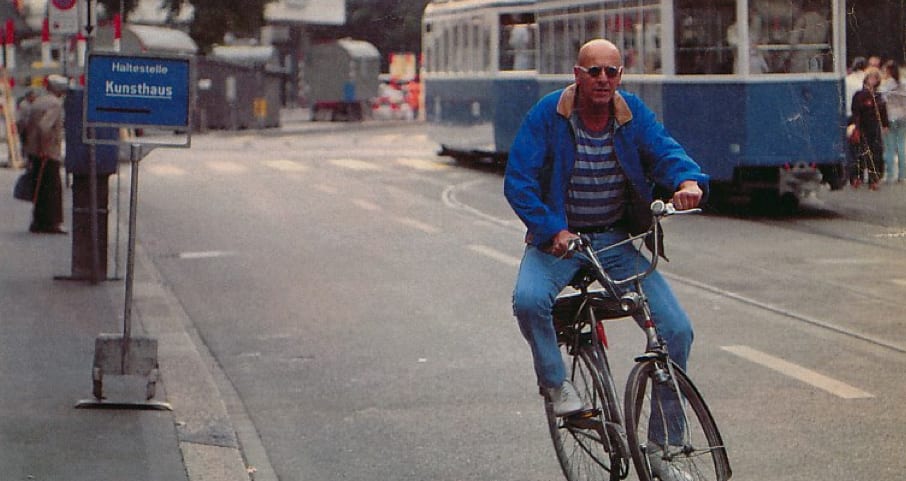 Mario Comensoli is born in Lugano on April 15. After the loss of his mother during that same year the orphan is entrusted by Father Albino, an upholsterer of Tuscan origin, to the La Misericordia Institute. Two sisters, Palma and Giovanna Ghiraldi, who help the sisters in the orphanage and live in the working-class district of Molino Nuovo, decide to raise him and become “my two mothers” for Comensoli.

Comensoli frequents the ateliers of Carlo Cotti and Giuseppe Foglia who discover his talent and encourage him on the path to painting. In 1943 he is awarded a scholarship by the Torricelli Foundation, which enables him to attend courses at the Zurich School of Decorative Arts, where he settles permanently in 1944. At the end of the Second World War, he enriches his artistic experience with frequent and prolonged stays in Paris, where he is influenced by the Cubist universe of Picasso and Fernand Léger.

Mario Comensoli tells of the existence of immigrant workers from the south who carry out the most humble and demanding jobs in Switzerland. This is how the cycle of “The Workers in Blue”, so called for their working clothes, is born. He represents them with an intense interest that can only be explained by going back to the years of his difficult childhood.

In the 1960s, he takes up antithetical themes of immigrants and in his paintings draw attention to the alienation of the rich Zurich bourgeoisie.

May 1968 does not leave Comensoli impervious and he launches into a cheerful and irreverent counterpoint to the intellectual myths in circulation. He achieves the result through a chromatically strong, almost poster-like painting, leaning heavily on the teachings of Pop Art.

Zurich’s gallerist Jamileh Weber gives him carte blanche and Comensoli creates a sort of three-dimensional chapel whose themes are female emancipation, sexual liberation, and his reversal in the indomitable machismo that he would like to reassign the roles in his own way. From Zurich, thanks to Pro Helvetia, the chapel moves to Paris, to the Porte de la Suisse, where it is faithfully rebuilt.

In 1978, during the occasion of the Film Festival, Mario Comensoli brings a series of paintings to the legendary Grand Hotel in Locarno dedicated to the uniformed children that sell cigarettes and popcorn in the dark auditoriums where the films are shown. They are the real stars of an improvised performance that overlaps the sacredness of the big screen and its celluloid stars. The “Discovirus” cycle also hails from the same period and tells the story of the desire for redemption by the second generation of youngsters inspired by John Travolta, amidst the flashing neon lights in the discos of Zurich-Oerlikon.

At the beginning of the 1980’s, Zurich experiences a “no future” revolt, the revolt of young people who start protests in the squares against the conformism prevailing in politics and culture, calling for self-managed “free zones” in this city of business. Comensoli is not insensitive to these young people who keep the ideological dogmas that would soon break down the Berlin Wall at bay. The “Punks” thus enter his painting, which now takes up permanence in numerous Swiss museums, such as St. Gallen, Chur, Glarus, Locarno, Aarau and, in the most coveted temple of art, the Kunsthaus in Zurich, in 1989.

After the triumph of the Kunsthaus, Comensoli’s optimism gives way to a heavy existential bitterness. The young “bearers of hope” shoot up in the drug parks of Platzspitz or Letten, and Comensoli now represents them as larval figures, ethereal and moving against a grey background. His last paintings are a sort of “memento mori” before the departure. On June 2, 1993, Mario Comensoli dies of a heart attack in his studio in Rousseaustrasse.

1994
The Mario and Hélène Comensoli Foundation

His wife Hélène also passes away less than a year later, on 8 February 1994, after putting into order and archiving her husband’s production. According to his wishes, all the works in his possession are brought together under the aegis of the Mario and Hélène Comensoli Foundation, which has its headquarters in Zurich.